This alert level four lockdown will mean the following changes:
– People will not be allowed to mix with anyone they do not live with. However, single person households are allowed to form a support bubble with one other household.
– Non-essential shops will close, including gyms beauty-salons and hairdressers.
– Restaurants will only be open for takeaway.
– Mosques can remain open for ritual obligation worship only whilst maintaining social distancing regulations and must have carried out risk assessments.
– Worshipers must not congregate outside the masjid before and after the prayer.
– Nikkah and Janazah can take place, but within the safe limits of the mosque, and only the specific ceremony.
– All children organised activities are not to take place, thus the madrasah or maktab cannot continue in the mosque. Many mosques will go back to providing this service online

– Travel is only for essential purposes

Places of worship have been allowed to remain open as they have consistently been run safely and with strict measures, we must keep this up however to ensure everyone’s safety. Worshippers attending mosques, please only do so if you are certain it is safe, don’t risk harming another person. Stay at home if have any symptoms or have been in contact with someone who has an undertake a COVID-19 test.

Stay at home, continue to wash your hands, wear your masks and maintain social distancing.

On Monday the 9th of November Wales’ Firebreak will end and Welsh Mosques will open their doors to daily prayers and Jummah prayers again.

We’ve produced a handy infographic to help you keep your congregation safe!

We want to emphasise that even though the Firebreak period has ended, we are still in the midst of a pandemic and urge everyone to stay safe by regularly washing hands, keeping 2m distance and wearing face masks in public areas.

We’ve attached a small infographic highlighting the key changes and messages from the Welsh Government. 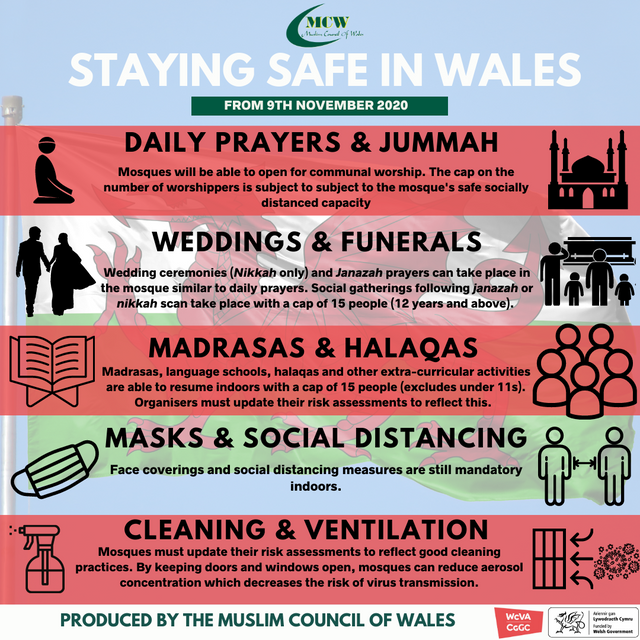 These next two weeks are going to be a difficult one for us living in Wales with the new lockdown measures coming into place from tomorrow (Friday 23/10/2020).

We must do our bit to in the battle to stem the spread of the coronavirus by staying at home.

We’d like to thank the Welsh Government and the Wales Council for Voluntary Action (WCVA) for supporting the work Muslim Council of Wales does. 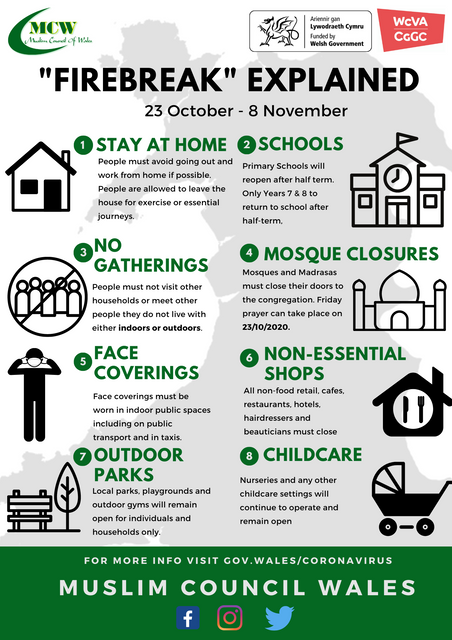 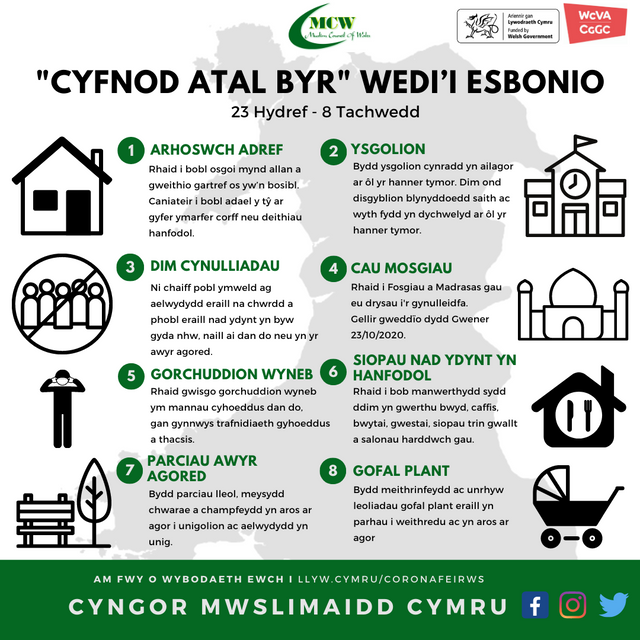 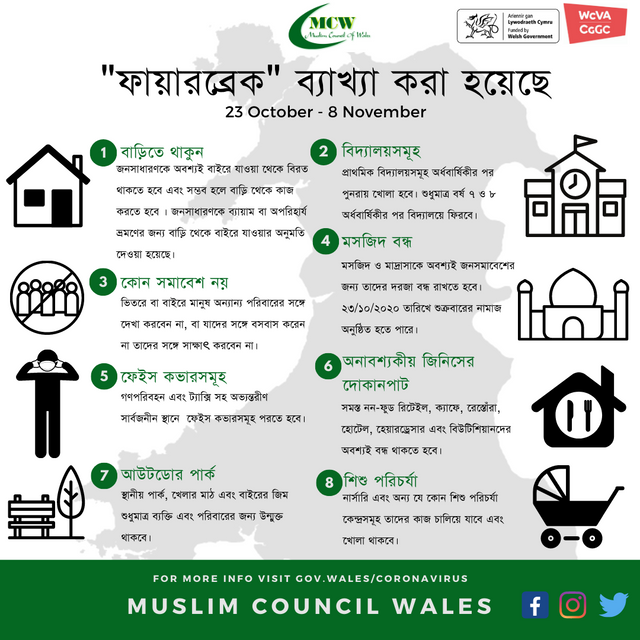 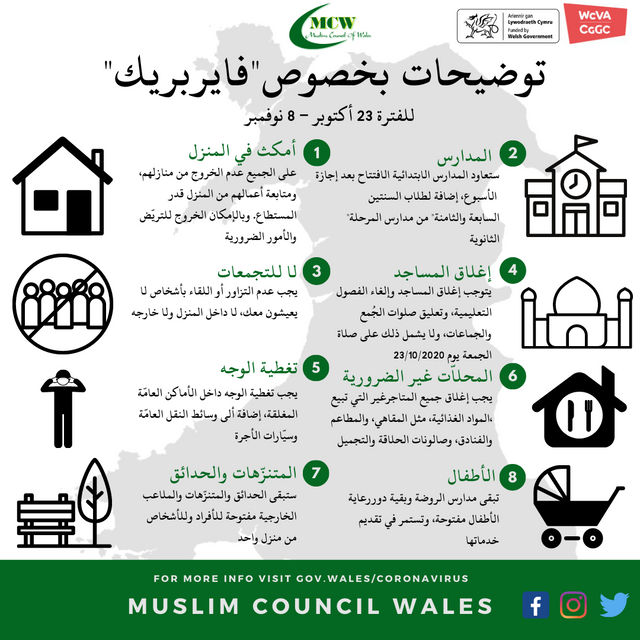 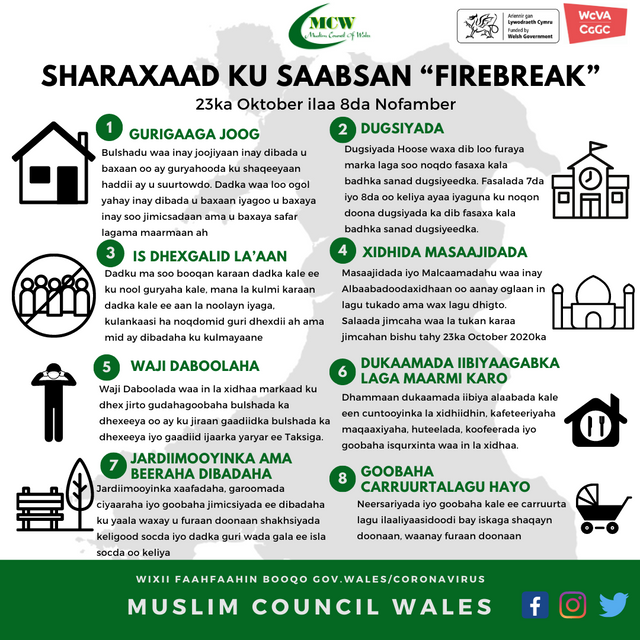 We have been just been briefed by Welsh government regarding the proposed “Circuit Breaker” Lockdown Measures.

The details of the new lockdown measure a:
– Dates: Friday 23/10/2020 6pm – Sunday 08/11/2020
– Jummu’ah prayer will be allowed to take place on 23/10/2020
– Mosques to suspend the 5 daily prayers including educational activities
– Remote learning can be utilised
– There is no change to the rules surrounding Janzah and Nikkah ceremonies
– Essential public services can take place at a place of worship such as food kitchens, food banks, childcare provision etc

The Muslim Council of Wales have produced this infographic for our Mosques to benefit from the key messages. 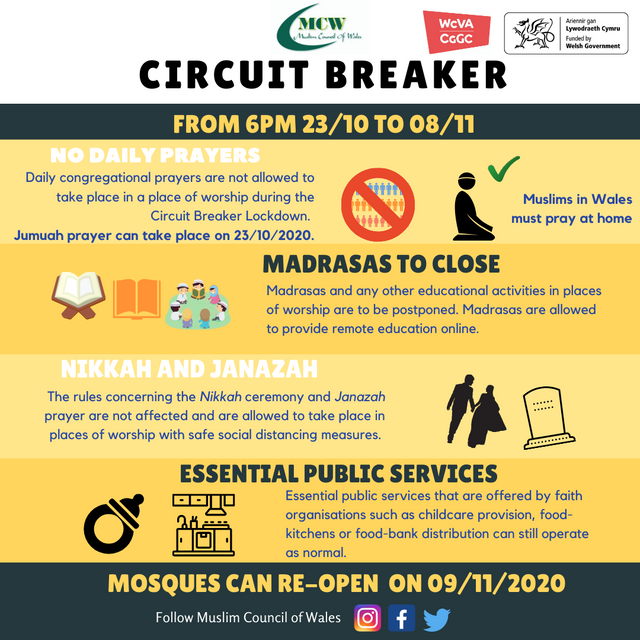 In April 2018, several Jewish representatives, including the Board of Deputies and the South Wales Jewish Representatives Council, requested an informal meeting with Saleem Kidwai OBE (Former Secretary General of the Muslim Council of Wales). At the meeting, the attendees raised several historical Facebook and Twitter posts made by Sahar al-Faifi, our then Assistant Secretary General, which they considered anti-Semitic. We indicated that this discussion would be best conducted with Sahar present, as we were confident Sahar was not anti-Semitic, and had positively engaged with many Jewish organisations and synagogues throughout working within the Muslim Council of Wales.

At the meeting, Sahar made an unreserved apology for an anti-Semitic post made in the past and deleted. The attendees accepted the apology and thanked Sahar. Subsequent discussion focused on articles and extended Facebook posts made, and as to whether they were anti-Semitic. For example, this included items such as a comment piece Sahar wrote criticising Sajid Javid for not visiting a mosque, yet making visits to a synagogue. In general, the attendees all accepted Sahar’s intended meaning was not anti-Semitic, but there was disagreement as to whether the wording used conveyed that. The meeting concluded positively with several action points, including anti-Semitism training (as a whole, but including Sahar) and the Jewish representative to attend Islamophobia training to which they have not done yet.

Through the meetings, Sahar al-Faifi was open, willing to engage with Jewish representatives, keen to seek a positive resolution.

Her commitment to social justice is exemplary, and throughout her tenure in the Muslim Council of Wales, she campaigned and worked for equality and justice for all in society – without exception or discrimination.
Sahar’s public profile and visibility as a Muslim women active in politics and campaigning has made her a target for abuse, online and in-person. Her case also highlights the vulnerable position of Muslims in public life, who face much greater scrutiny than others.

We believe it is important for Muslims of all backgrounds to engage in political life, and become active members of political parties. One of the aims of MCW is to promote active citizenship and engage Welsh Muslims with all parties across the spectrum.